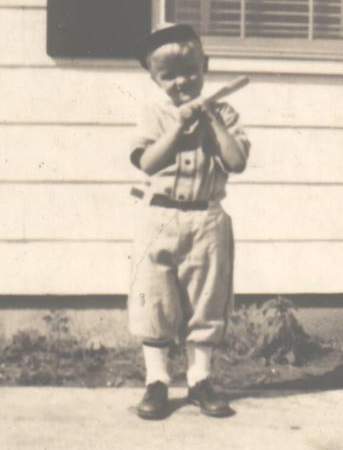 Born Was I in the middle of the Zodiacal year...in Hoboken, New Jersey: the third child (and second son) of a thirty-one-year-old couple, already married ten years. The world was 'in turmoil' (but when was it not?). World War II had ended only the year before. I am a 'baby boomer'.

My earliest verifiable memory is that of standing, of a morning, in a kitchen while my mother...seated at a Formica table...face hidden behind a newspaper (held up with both hands)...pretending to read and feigning casual...told me that I would not see my father again. Seems he had been killed (with at least eighty-four others) as a passenger on The Broker...a Pennsylvania Railroad commuter run between Jersey City and Red Bank. He was but thirty-five and a newly-minted mechanical engineer, employed at DuPont...upstate.

After eight years of night school, a fourth child (second daughter) on the way, he and my mother moved our family to Shrewsbury...and a new two-story tract home on Parker Place...a cul-de-sac. For my long-sacrificing dad, and to us, all shanty Irish, it became, simply, and literally, a 'dead end'.

Dad, although brilliant in matters technical, was cursed by the still-poorly-understood malady of stuttering. Because he was 'gone' before my memories were fully-formed, I have no audio recollection of his speech impediment but...factoid: it was severe enough to disqualify him for military service. Most researchers, today, accept that stuttering is a genetic (i.e., not an acquired) trait. My older brother stutters...but mildly. A cousin stutters profoundly. Yet...I have always been 'silver-tongued'.

By 1951, the understanding of genetics (and its role in a phenotype) had not progressed far beyond Gregor Mendel's peas. It was widely considered to be a psychiatric disorder...a 'neurosis', to use the catch-all term.

On my first day at the local grammar school, only I and one other kindergartener, a giggly girl named Susan, 'presented' without a dad. In first grade, among the new words I learned to spell, while filling in (out?) a 'form', was 'deceased'.